Black Snake Productions can offer an in depth, qualified and educational service on snake safety, wildlife education, consultancy and training to private and government corporations.

We can offer a number of different services including Snake & Spider safety seminars, snake and wildlife removal and consultancy, Snake handling courses as well as Wildlife management and spotter-catcher work.

With over 10 years experience in teaching wildlife education and safety, 20 million public liability, fully qualified trainers, full wildlife licensing we are the safe, professional and qualified choice for your Wildlife training and education needs. 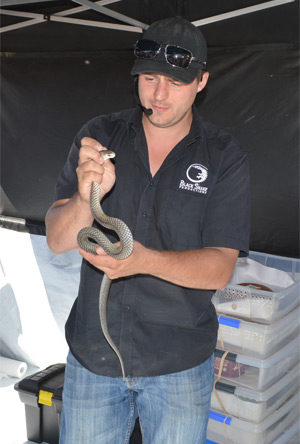 Our Snake safety sessions allow the attendees to get up close to the most venomous snakes and spiders in Australia in complete safety through a two hour in depth session. All venomous snakes are safely contained during the session while attendees may interact with harmless reptiles such as lizards and pythons.

The session includes both theory and practical aspects with all attendees leaving with a snake and spider safety manual at the end as well as a better understanding of these potentially dangerous animals.

Black Snake Productions Snake and spider awareness programs reinforce safety and awareness with up to date knowledge and practical advice to ensure that all attendees leave with an understanding of how to calmly and effectively deal with a potential life threatening situation if ever one arises.

We cover topics such as:

Black Snake Productions will be able to offer venomous snake handling and removal training from 2015 onward. Check back soon for updates!

“I ran out of time to email you yesterday but wanted to let you know how great I thought the venomous spider and snakes training was. Mike (Black Snake Productions) was really engaging and it was obvious to see he enjoys what he does, was very informative and easy to understand. He gave lots of examples of why we need to do things, not just what to do (so it’s easier to remember – I find anyway).

Thank you for giving me the opportunity to attend, I got to hold a blue tongue lizard (not very well but I was brave enough to do it).

It was very interesting, thanks again,”

Black Snake Productions offers 24 hour snake and reptile removal and relocation, with 15 years experience handling some of the world’s most venomous snakes we can quickly and calmly attend your property day and night to locate and remove any dangerous or problem reptile.

If you see a snake: Work place assessments will help address issues such as snakes and dangerous animals within the workplace and removal of these animals, potential man made habitats and solutions as well as a comprehensive report. Reports will underline the potential problems, danger from snakes and other wildlife species as well as protection of wildlife, recommendations and guidelines for future issues. We can provide JSA’s for the work site, Safe working procedure reports as well as full training in dealing with the snakes or other problem wildlife on the work site.

Some areas we specialise in include:

The very common tiger snake gets its name from the dark bands around the body and the yellow or cream belly, some tigers may not have bands and can be a uniform colour. Tiger snakes are the 4th most venomous snake in the world. Tiger snakes have a diamond shaped head and can grow up to 1.5 meters. They are a very active snake and can be aggressive. Found most commonly along the Yarra and other water ways, the tiger snake lives in most habitats and eats birds, rodents, reptiles, frogs, fish and other prey. 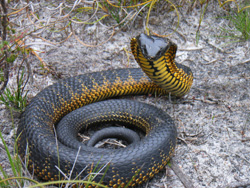 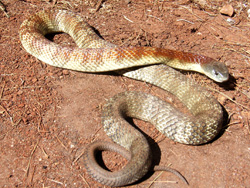 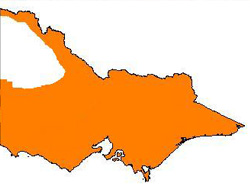 A very easily identified snake, the red belly is always a jet glossy black with pink to red scales towards the belly (giving it the name). It can reach up two 2 meters in length but is often smaller. Mostly found around Gippsland and towards Yea the red belly is not often found around the suburbs of Melbourne. Its habitat includes marshy swampy areas, near waterways and bushland. They feed mostly on frogs. The eastern brown is the 2nd most venomous snake in the world, extremely aggressive, fast and easily upset, the brown is the one snake to avoid at all costs. This snake should always be removed if seen. Found in drier areas such as west and north, kangaroo ground and other areas it is an active hunter preying on rodents and reptiles. Never approach the brown snake and keep pets away as it will defend itself. A pale brown, reddish brown, dark brown to black, these snakes can be distinguished from brown or black snakes by the pale face and light coloured lip. These snakes prefer a cooler climate and can be found in colder regions of Melbourne especially in forested areas, the Yarra Valley, the Dandenong’s e.c.t. The copper head is one of the most common snakes around Melbourne and feeds on frogs and lizards. Not as venomous as the brown or Tiger but still regarded as dangerous. At Black snake productions we call the copperhead snake “The red belly of the Yarra valley” as so many people mistake this snake for the red belly black snake which is not found in the Yarra valley or metropolitan region. 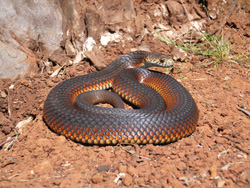 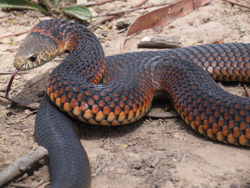 This species is identified by the white stripe running along the upper lip. They come in red, dark green and grey. They have a distinct beautiful salmon colored belly. This snake is diurnal and is normally found in thick grass forest covering and found mostly around the eastern parts of Melbourne. They feed mostly on small lizards and only grow to a maximum length of 50cm or usually smaller. 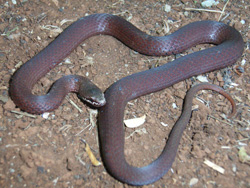 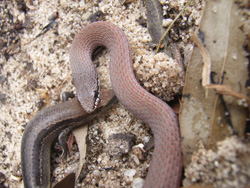 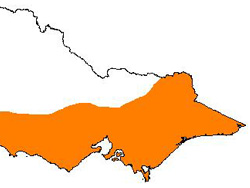 The small-eyed snake is a black or grey colored snake with a white belly. It has very small eyes and grows up to 45cm or less. This is a nocturnal species and is very shy. It resides in the areas of eastern Victoria from just west of Melbourne to Mallacoota in the far east, it is not found down towards Wilsons Prom or Philip Island. This species is regarded as dangerous. 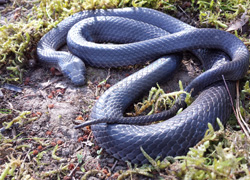 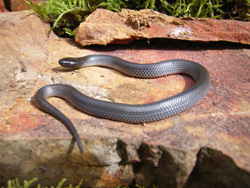 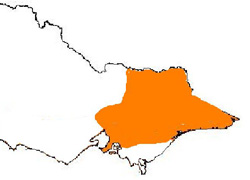 The little whip snake is found throughout south-western, central and North eastern Victoria, it is often found under volcanic rock up in the northern suburbs of Melbourne and can be often confused with a juvenile brown snake. It is not considered dangerous, however it is known that one man has died from a bite due to a unique reaction. Blue tongue lizards are commonly found in back yards around Melbourne and Australia, they eat pests such as snails, slugs and other invertebrates while also feeding on dandelion flowers and other plant matter. They are one of the best pet reptiles for children to start of with and are almost always good to handle but it is illegal to remove them from the wild. Blue tongues are often killed by people thinking they are snakes, it is illegal to kill any wildlife in any situation. 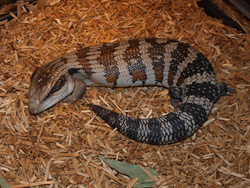 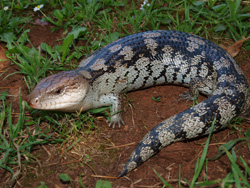 Lace monitors, Lacey’s or tree monitors are found in the outer suburbs around bush-land areas although they may be found in the inner suburbs as escaped pets or displaced reptiles. They feed on any small animal dead or alive that they can swallow as well as larger carrion and birds and reptile eggs. Lace monitors can grow quite large and if handling is attempted can cause serious injury. 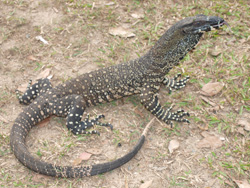 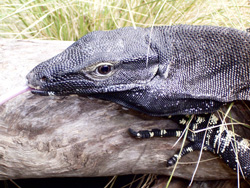